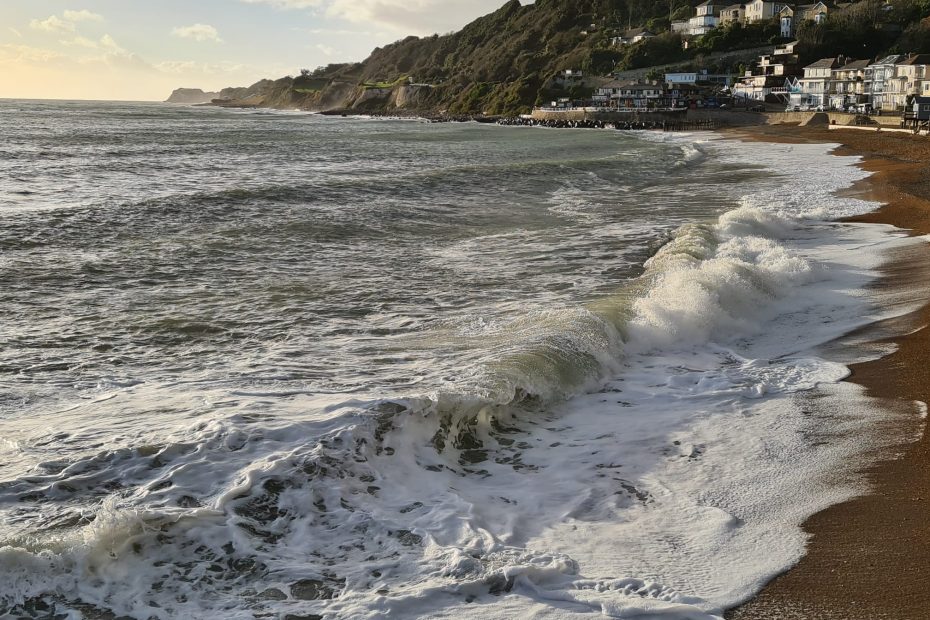 So, believe it or not these two photos were taken just 24 hours apart at Ventnor Bay! Yesterday the sky remained a vivid blue all day whereas today … I had looked up at the approaching ‘black’ minutes before taking second photo and just about found cover in time – not easy along exposed esplanade!

Yesterday’s walk took me from sunny Ventnor Bay over to St. Lawrence, where I climbed ‘to the top’ before taking a return course coming back down via a path which David was busily at work clearing – not just for me, I suspect! He had already filled a bucket with mud by the time I appeared; and he kindly said he was happy to have his pic on my website as I said I wanted to acknowledge the invaluable hard work of folk like him that keep our pathways clear. This stretch of path has a magnificent cliff overhang which is why I chose it as my return route, re-joining the coastal path just a bit further along.

I hadn’t actually intended returning to Ventnor today but when I rang the Heritage Centre to find out when it was open I found out it is just Fridays at the moment – which was why I returned, in slightly less clement conditions, today. It was well worth the effort as the two lovely ladies there made me more than welcome and provided me with lots of useful information – which I will of course put to good use in future walks in the area!

I did start the heritage trail – and got as far as Number 4 – before the overhead ‘black’ turned into something really nasty and wet – at which point I thought, hmm maybe another time. But it was amazing to see Ventnor in such contrasting lights .. though I’m hoping my next walk there will be sunnier of two scenarios!