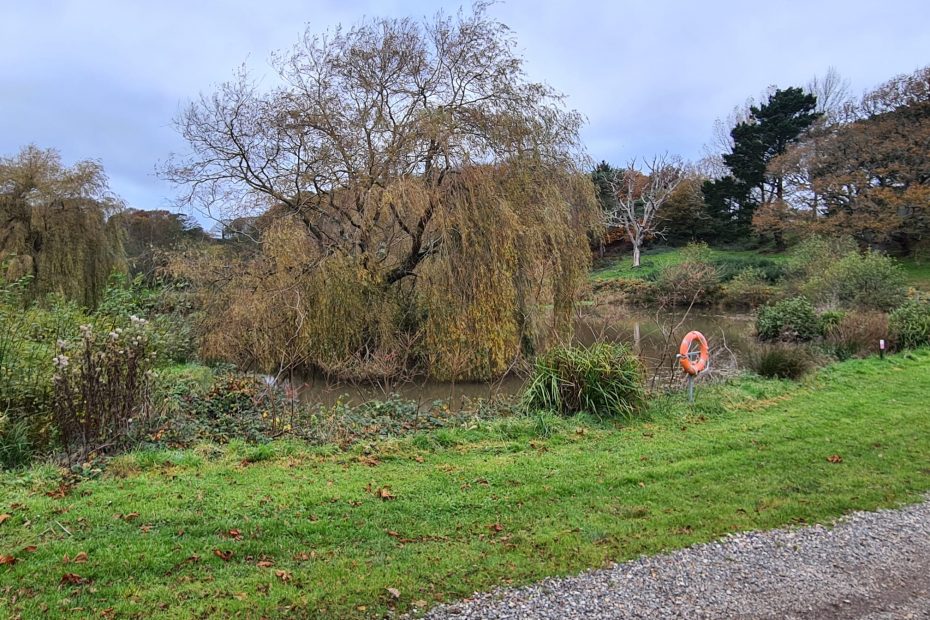 Sometimes you go on walks and quickly realise why it’s so important to check them out in advance – of taking others with you, that is. Star rating in the case of this walk a tad low; whilst chances of imminent demise, sky high!

I rather belatedly chose this walk (set off midday)  from a ramblers book – nice n local and 5.5 miles no big deal. I had reckoned on a 2 hour jaunt – allowing plenty of time to rest before my Children in Need Zumba class at Sandown in the evening which I knew would be manic – lots of crazy songs with moves to match – plus dancing in zebra onesie – guaranteed to lose any excess pounds which, in may case, isn’t many – can thank my genes for high metabolic rate, thankfully nothing to do with careful eating/drinking!

Starting point: Shanklin Railway Station – where one of the new trains had just pulled in, spilling passengers into car park initiating the first conversation of the day – who much do you pay to park here? Answer: £1.50 all-day ‘so you can stay til midnight! Thankfully this prophecy was only half fulfilled – I did get back just before dark but only just! Anyway, thank you to a lady who gave me this information – which I promptly rejected in preference to a bit of offside road parking just down the road. Yes, I know that officially makes me probably the I of W’s thriftiest (meanest?) car drivers – but ‘look after the pennies and the pounds will look after themselves as somebody famous (and equally tight) once said!

So, noting the time of departure at 12.20 pm, off I set – full of bounce and enthusiasm .. until I hit the first obstacle .. namely a bog! This was to the right of a place called Ninham Farm just after walking through two ponds .. on a road that promptly became a Private Keep Out Road (without adding, the other option ‘Feel free to drown by taking the public path) .. obviously wanting to keep down the number of local or visiting plebs. Belated apologies to anyone walking along said private road – which ran parallel to quagmire route – apologies that is for loud exclamations of ‘….!’ ‘…..!!’ that came from normally very restrained, polite walk leader. Let’s just say, it really wasn’t much fun and within around 100 metres I hauled myself over private Keep Out gate onto Private Keep Out road, preferring arrest to an untimely death by mud-immersion or whatever verb is for disappearing without trace under quaggy mire.

To be honest, my previous buoyant spirits were beginning to flag a little after this experience .. but worse was to come. Death by highway annihilation – as in being run over on a road with no pavement – or not one I could get to from where I had come out – serves me right for being unlawful, I guess. Lovely John pointed out footpath I could have taken instead of facing what seemed like inevitable death – Lovely John I should point out, being a retired walk leader himself, who very kindly told me about what paths to take locally (for some reason, not including one I’d just attempted).

I should say at this point it is these random meetings that make my solo walks so special – exemplifying the message intrinsic in Kate Adie’s The Kindness of Strangers (book she wrote and lecture of hers I once attended – a couple of weeks after Germaine Greer – both amazing ladies – seem to remember these were at Guildford Yvonne Arnaud but I might be wrong). Much as I love the solo experience – I can stop and take endless photos and peer lengthily at inanimate objects – like the boat motor further along on the walk which, spoiler alert, I thought was a rifle pointed at me (see photo, you may see where I’m coming from – or not, depending on your eyesight .. and maybe a little imagination) – without the worry of annoying whoever’s with me. Plus of course the conversations with complete strangers that I have – which generally add at least an hour or two to my carefully timed route. So, if times I give for walks are ever just a little out … that’s why! Even when I have an innovative high-tech gadget working – namely Plot Your Walk or some such app – they’re not so advanced as to remind me to press pause when I stop and chat – chat being a loose term covering up to an hour’s worth of natter.

So, after John had kindly put me on the right track, all I had to contend with next … was dodging aeroplanes! This is a slight exaggeration – not that I’m one to overdramatise – but I did have to walk across the end of Sandown Airport’s landing strip. And then there was, even more worryingly, that sign at the entrance to the holiday camp saying ‘Beware Children’! After 20 years of primary school teaching, I am more than aware of what danger they can present (forget the herds of cows, low flying aeroplanes, quagmires, highways from hell – children top the lot).

And so it was I then encountered a large army – of fellow walkers, whose march I, needless to say, felt obliged to halt – with a natter! But only briefly on this occasion – up until I mentioned the infamous bog to which several responded ‘Oh yes, it’s always bad along there’ .. turning their eyes to my mud-spattered trousers and barely concealing what can only be interpreted as extremely smug smiles – at which point I bade them farewell and continued on my own solo adventure – surely way more exciting than any well thought out group walk .. which I have to remind myself I was there to plan – some hope!

And so I continued on my way – within minutes having to stop for another chat! I know, bad habits and all that. This time it was with Oscar .. actually, that was the goat .. but I didn’t get the name of the lovely volunteer gentleman who told me all about the animal sanctuary, just at the foot of Borthwood Copse.

And then there was the lass, out with her daughter, who saved me from hours of wandering around the wood, lost – which has happened to me there before. I’m guessing (hoping?) I’m not the only one who struggles with directions in woods – when the book says turn left, once .. and then omits the several following left turns you have to make. I got out of the wood more by luck than judgement, thanking my lucky stars when I emerged in the right place – a first at this particular wood.

And then the lad who saved me hours of wandering around his farm, lost. Are you spotting a bit of a pattern here? He did say everyone got lost and missed the path – as there is no sign. Maybe someone should stick one up – or maybe that would take away guaranteed entertainment in an otherwise rather off the beaten track place. Anyway, it was nice to experience again, at first hand, the kindness of strangers – particularly as my next challenge was having a rifle pointed at me! Well, OK, it wasn’t exactly a rifle .. in fact, it wasn’t a rifle at all, just looked very much like one from a distance. Maybe someone else can spot the likeness from the picture (one of the outboard motors) or maybe I just need another trip to Specsavers.

And finally the lady on the home straight, who had to listen to my grunts and groans, having only just mastered the ups and downs of America Wood. It was beginning to get a little dark and I was wondering whether I’d get a rest in before doing my Children in Need Zumba class in the evening. But I needn’t have worried. I, as usual, got back safe and sound (ish) and drove home with the happy knowledge I’d clocked up yet another walk in a previously largely unvisited location… Even if I won’t be leading this particular walk, any time soon!